How to Decipher a Whiskey Label like a Pro 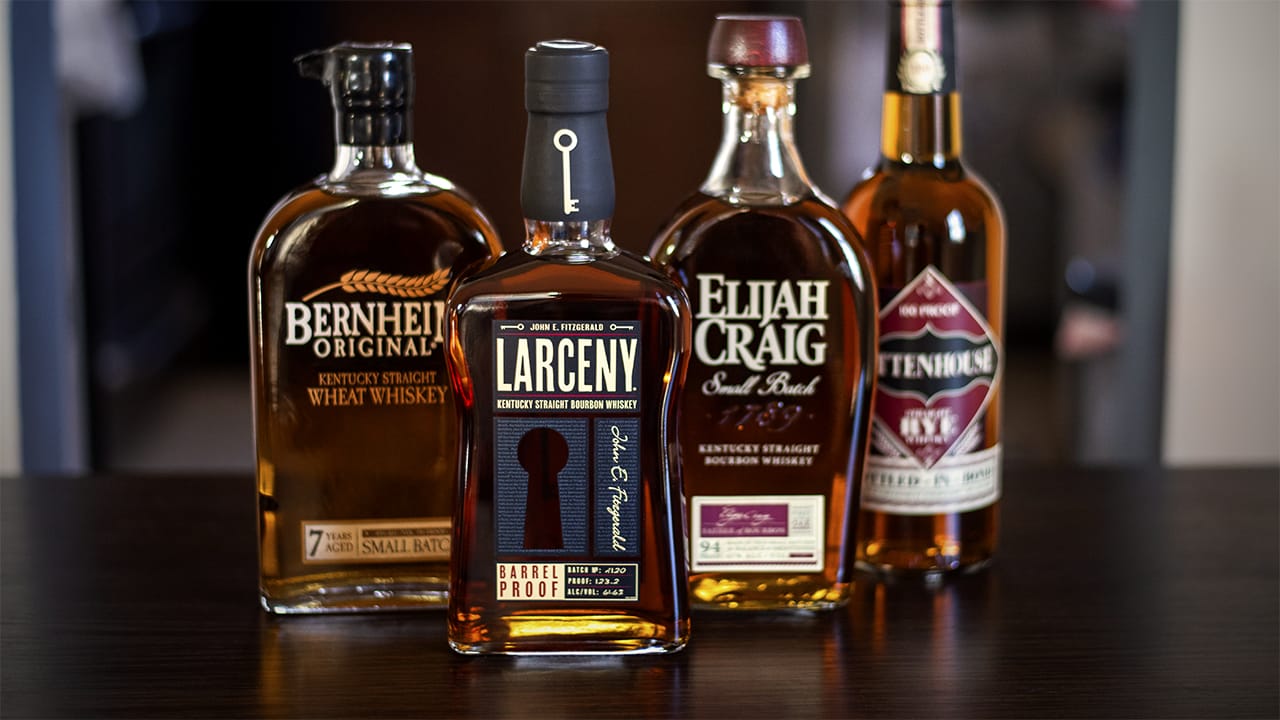 Small Batch, Barrel Proof, and Distilled By. Here’s what you need to know.

There’s a saying here in Kentucky… “The best Bourbon is the one you like the best.” This reflects the straightforward attitude that people around here bring to American Whiskey, the product we get to share with the world and helps to fuel our regional identity.

Mostly, it’s a call to ignore the hype and focus on what matters. There is, of course, no such thing as the best Bourbon. If you find it enjoyable, a good value for the quality you’re experiencing, and consistent from bottle to bottle and sip to sip, then it’s the right one… at least for this glass.

Here at Heaven Hill Distillery, we’re proud to make a portfolio of American Whiskeys revered by both critics and fans alike. For over 80 years, we’ve devoted ourselves to the craft of fine Bourbon and whiskeys, and we want our fans to know exactly what they’re getting inside a bottle. Our Whiskey Ambassador Bernie Lubbers considers it this way: “I think of everything I see on a label as a merit badge. Each word there means something, and if you know how to decode what’s there, you can learn everything you need to know about a Bourbon.”

Let’s take a look at what you’ll find printed on a bottle and explore some of the finer points for understanding the spirit inside.

Legally Defined, Federally Regulated
Bourbon and American Whiskey are regulated in the United States by the TTB — the Alcohol and Tobacco Tax and Trade Bureau. You can find the full legal definitions here, but for American Whiskey, there are a few basic rules to keep in mind. Other than Corn Whiskey, each style of whiskey — Bourbon, rye whiskey, wheat whiskey, etc.— must be produced from a fermented mash of at least 51% of its respective grain (e.g. corn, rye, wheat).

They are then distilled to no more than 160° proof, and placed in charred, new oak containers at no more than 125° proof. Nothing can be added to the barrel except water or, interestingly, other whiskey of the same style.

A Corn Whiskey follows the same proof standards, but must be made from at least 80% corn grain. Corn Whiskey can be stored in either a used charred barrel or a new uncharred oak barrel. (It cannot be stored in new charred oak as that will neutralize too much of the Corn Whiskey flavor, turning its taste profile into Bourbon, essentially.)

There are other legal signifiers on the label as well. A “Kentucky Bourbon” must be aged for a minimum of one year in Bourbon’s home state. Lubbers suggests the word “Kentucky” also communicates a regional quality standard, in the same vein as Cognac, Champagne, or Tequila, which are all products produced in a specific geographic area and climate.

A “Straight Whiskey” has been aged for at least two years. If aged fewer than four years, the age statement must appear on the bottle.

Therefore, for a product to be called a Kentucky Straight Bourbon Whiskey, it must meet the following requirements: 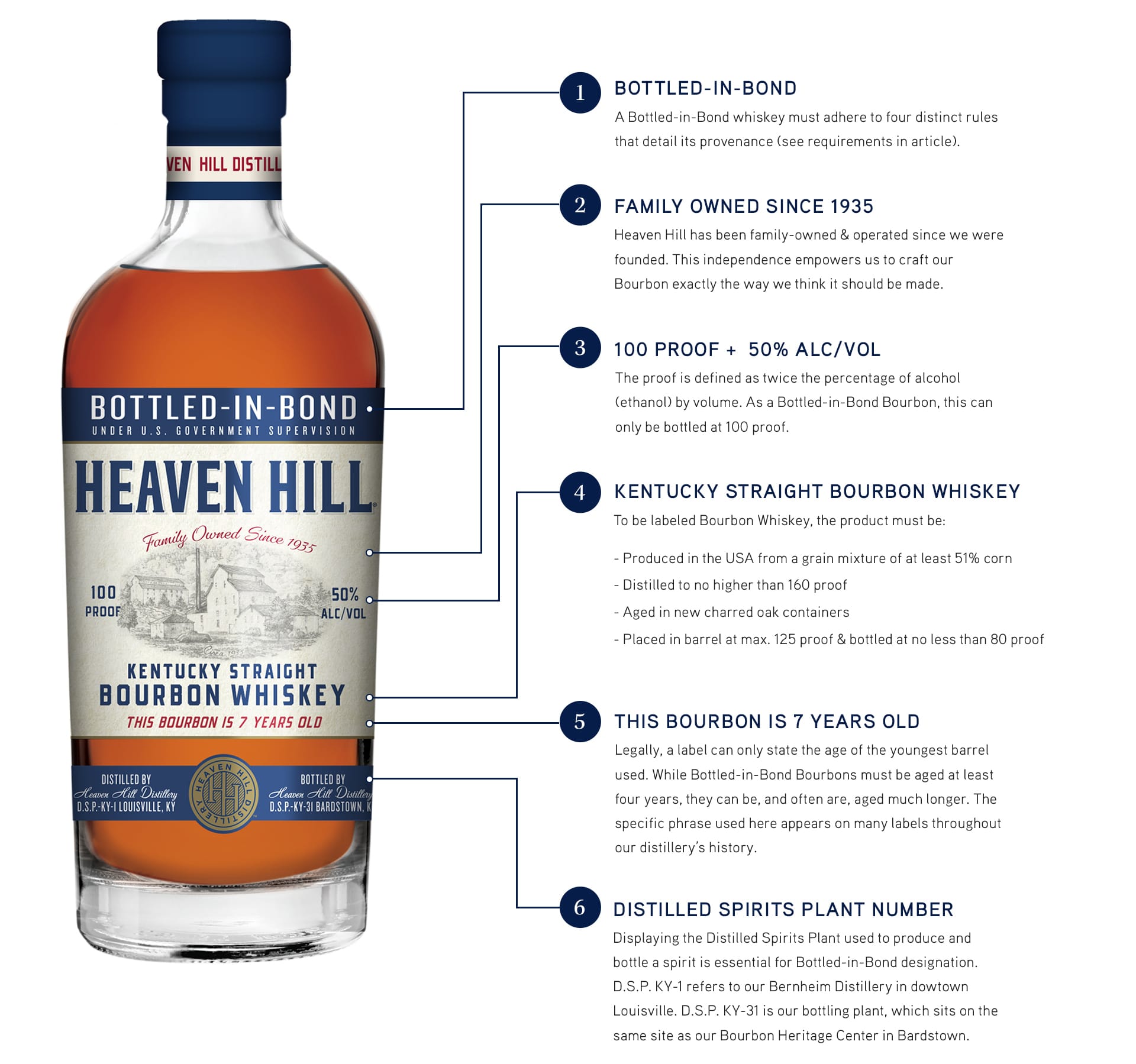 Bottled-in-Bond, Proof, and Other Standards

Bottled-in-Bond is one of America’s great whiskey traditions, and at Heaven Hill, who produces more Bottled-in-Bond whiskeys than any other distillery, it serves to let consumers know a spirit was produced under exacting standards of quality. To be labeled Bottled-in-Bond means that the U.S. government serves as a guarantor of the whiskey’s integrity, and it must meet the four restrictions set forth in the Bottled-in-Bond Act of 1897:

All whiskey fans know that proof is determined by alcohol by volume (ABV) on a scale of 200, or twice the percentage of ABV. But did you know what was originally “proved” by a spirit was its ability to burn gunpowder? Beginning in the 1500s, the English government, who would tax a spirit differently according to its alcohol content, would soak a gun pellet in the liquid. If it could still burn, the spirit was rated “above proof” (around 57% ABV) and therefore taxed higher.

The proof system in the United States was established in 1848, where the standard was defined as: 50% alcohol by volume = 100 proof. In the U.S. it is not required to declare the proof on the label, only the ABV. Nearly all spirits still indicate a proof (and therefore both numbers) as that value is historical, widely used, and more meaningful for comparison.

Other terms that you’ll find on an American Whiskey bottle mean exactly what they say. An age statement means that there can be absolutely no product in the bottle aged less than the number of years declared, though there could be older whiskey inside. Single Barrel means just that: only the product of one barrel is found in the bottle. And Barrel Proof, called “cask strength” in Scotch whisky and Irish whiskey, means that the proof in the bottle matches the combined proof of the barrels used to make it. 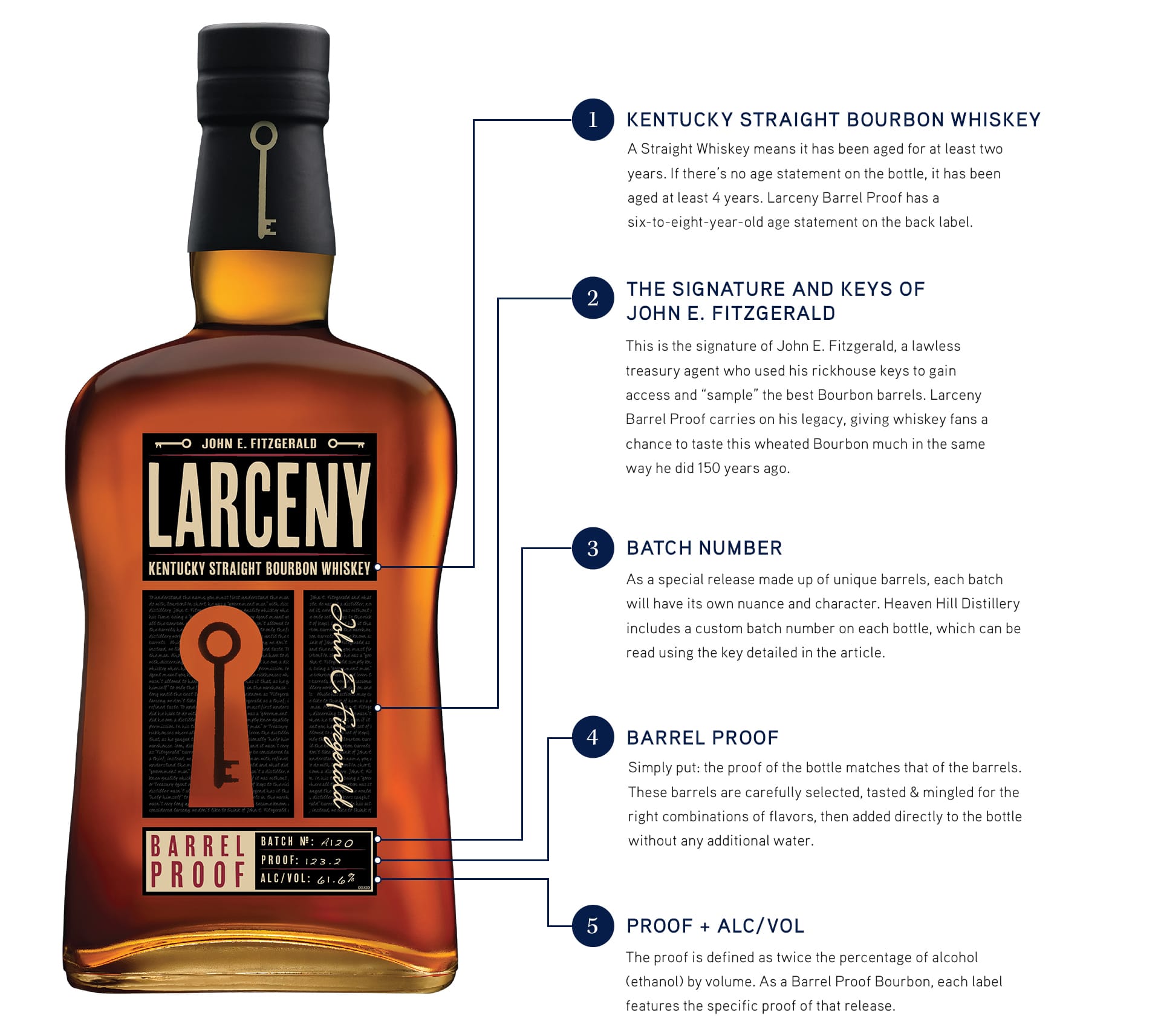 Many special batch and single barrel Bourbons include the specific information about the spirit’s origins and release. For example, Henry McKenna Single Barrel includes the exact barrel number and “Barreled On” date, handwritten on the front of every label. Evan Williams Single Barrel includes the same on its back label, plus a “Bottled On” date. This allows for comparison for the subtle barrel-to-barrel differences enjoyed in single barrel products.

Every bottle of Larceny and Elijah Craig Barrel Proof Bourbon produced by Heaven Hill Distillery is cataloged using the same naming convention, with the custom batch number on each bottle:

Lastly, there are common terms with no legal definition. For better or worse, things like very old, craft, fine, reserve, special, and handmade are not regulated and are used variably by distilleries. Small batch is also not a legal term, though it can indicate a distillery’s commitment to being intentional about mingling a certain number of barrels.

So, the next time you’re exploring our whiskey collection or browsing at the shelf, keep these in mind to help interpret what sort of quality you’ll find inside that bottle. Or, at least, to have something interesting to talk about at your local well-stocked whiskey bar.