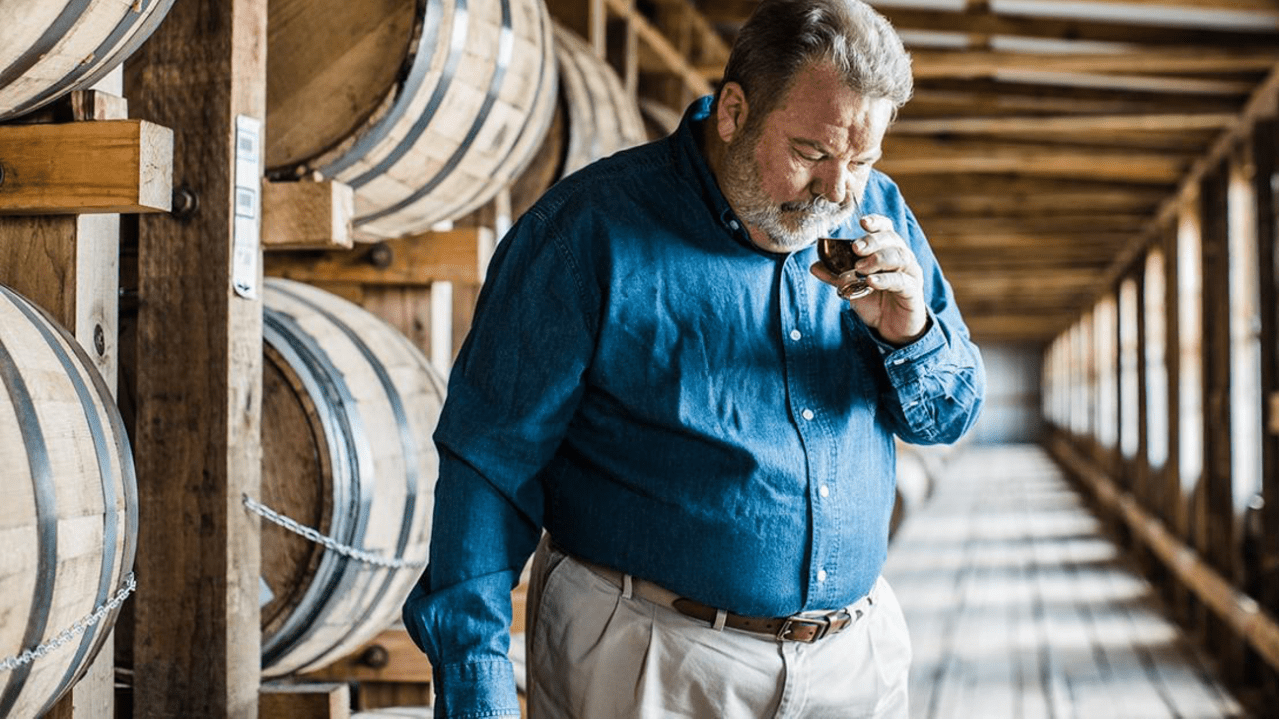 “Process engineer” is Mike Sonne’s official title at Heaven Hill Distillery, but neither of those words provides any insight into the coolest aspect of his job: the role of master taster. Though his palate is but one among several on the distillery’s quality control team, if Sonne’s picks up a disagreeable flavor, or his nose detects an off aroma, the spirit won’t be bottled until the issue is corrected. Despite not having any formal training to detect flaws and ideal flavors in spirits, his supervisors discovered his knack for noticing when something’s wrong, as well as tasting consistency from batch to batch and barrel to barrel. If you’ve enjoyed Heaven Hill’s Bourbons and whiskeys over the last few decades, you can thank him for that consistency.

After four decades at the distillery, Sonne’s bosses know he can’t stay forever– as much as they want him to. His exact retirement date is undecided, but inevitable. Until it arrives, he’s looking forward to long stretches of days with family and heavy stringers of fish caught at Lake Cumberland, where he owns a home.

So, while he’s still busy at Heaven Hill, we took some time with Sonne to ask about his storied career…

What brought you to work at Heaven Hill?

In January of 1981, they were hiring a lot of people to cover some new bottling initiatives. I grew up in Bardstown, so I knew a lot of people who worked here, and it was just an opportunity that interested me.

What was your first job there?
I started out in processing —chilling and filtering the Bourbon. To get a batch ready for bottling, it’s dumped from the barrels into tanks and cut with water to bottling proof. It’s then chilled and filtered, and I’d take samples to check for color, clarity, aroma and taste. Once all that was done, I OK’ed those tanks as ready to bottle.

When did your supervisors discover your abilities as a taster?
They were hiring a second shift quality-control person, and I was told to do a taste test before I could take the job. It was what’s called a triangle taste test: they asked me to pick the one sample out of each set of three that was different. I picked the correct one in each set and then asked, “Do you want me to tell you what else I think?” I then said, “This one is 4-years-old, and this one is 6 and this is 7,” which was right on.

As happens with good employees, you were trusted with more responsibilities over time. Tell us about those.
I’d accumulated a lot of experience in processing by working in the tank room, the dump room, the cistern room, and all the rest. So, when we expanded operations here in Bardstown, I was asked to design all the processing equipment and the new building in which it would go. Today, we have a bevy of engineers to do those things, but I did all that back then. Now, what’s funny is—the engineers get on me for not building everything bigger back then! No one could have expected the impact of the Bourbon boom.

In 2012, they made me a process engineer, which included being project manager over building barrel warehouses. I also oversaw facilities maintenance, which included managing repairs and security for our five warehouse locations in Nelson County. I also took on the roles of master blender and taster. It’s been busy! 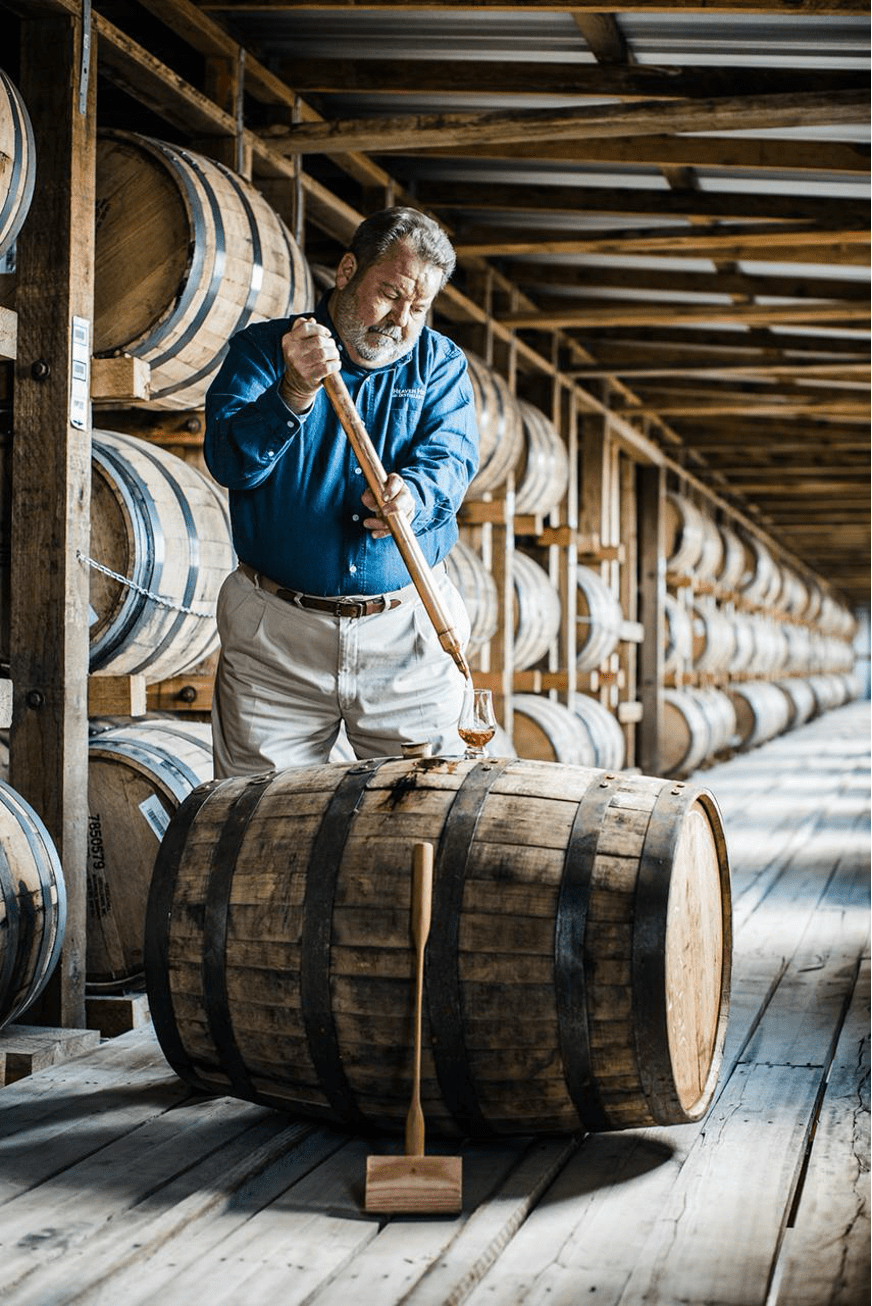 When you tell someone that part of your job is the role of master taster, how do they react?
Of course, they think it’s a dream job, but they don’t know what else I do besides that. I enjoy picking Bourbons for our standard lines and premium brands and special releases. After all these years of doing it, I’m confident that I know what our standards are. Picking barrels is also a great part of the job.

For readers who may not know the term, “barrel dump,” please describe it.
That’s when we pull barrels from our warehouses, take them to the dump room, remove their bungs, roll them over and let the whiskey ‘dump’ out. From there, it’s filtered, collected into tanks, cut to bottling proof, and tested by the quality control team.

To choose the barrels we’ll use in a dump, our production scheduler sends me the number of gallons he needs. We have roughly 60 warehouses spread around three sites near Bardstown, in Deatsville, at Cox’s Creek, and in Louisville. So, I have to pick those barrels carefully by location so I don’t send warehouse crews all over for just one dump. They have to be efficient with their time and work. It doesn’t always work out perfectly because you still have to get Bourbon that meets our age and flavor requirements for whatever we’re bottling.

How do you find the barrels you want when you’ve got 1.8 million of them in inventory?
Using our barrel inventory control software, I’ll pull up, say, Elijah Craig, and it’ll show me every barrel available in every warehouse we have. I’ll then select for 8-year to 12-year-old portions, and it’ll show me what barrels are of those ages and where they’re located. Then, what’s most important to me is which warehouse they’re in and the floor they’re on. That’s when I narrow down the barrels we’ll choose.

What makes you confident those barrels will be ready?
Experience, mostly. We have a lot of people here besides me who know which warehouses do best for which brands. But if I’m skeptical about something, I’ll ask a crew to go pull samples. If I’m choosing a dump for Larceny, for example, and I’ve not tasted our wheated mashbill from that particular floor before, I’ll need to sample it first.

How different is the whiskey industry since you started 40 years ago?
No doubt, the release of premium products is the biggest difference. Way back when, everyone had their 7-year-old Bourbon, and that was special. But now there are so many single barrels and special releases that get fans excited. It’s great to see that change because innovation is good for the industry and our customers.

Does having 1.8 million barrels in inventory make your job easier or harder?
It’s a good thing to have so many places to go and get what we need. But here’s where even that becomes a challenge: Right now, we’re producing 1,300 barrels a day at our Bernheim Distillery, but we’re only dumping 1,000 in Bardstown. That means we’re rushing to build new warehouses to hold those new barrels. We just built a nearly 56,000-barrel warehouse at our bottling facility in Bardstown, we’ve finished our twelfth, 55,000-barrel warehouse at Cox’s Creek, and we’re also excavating at that site to build more. 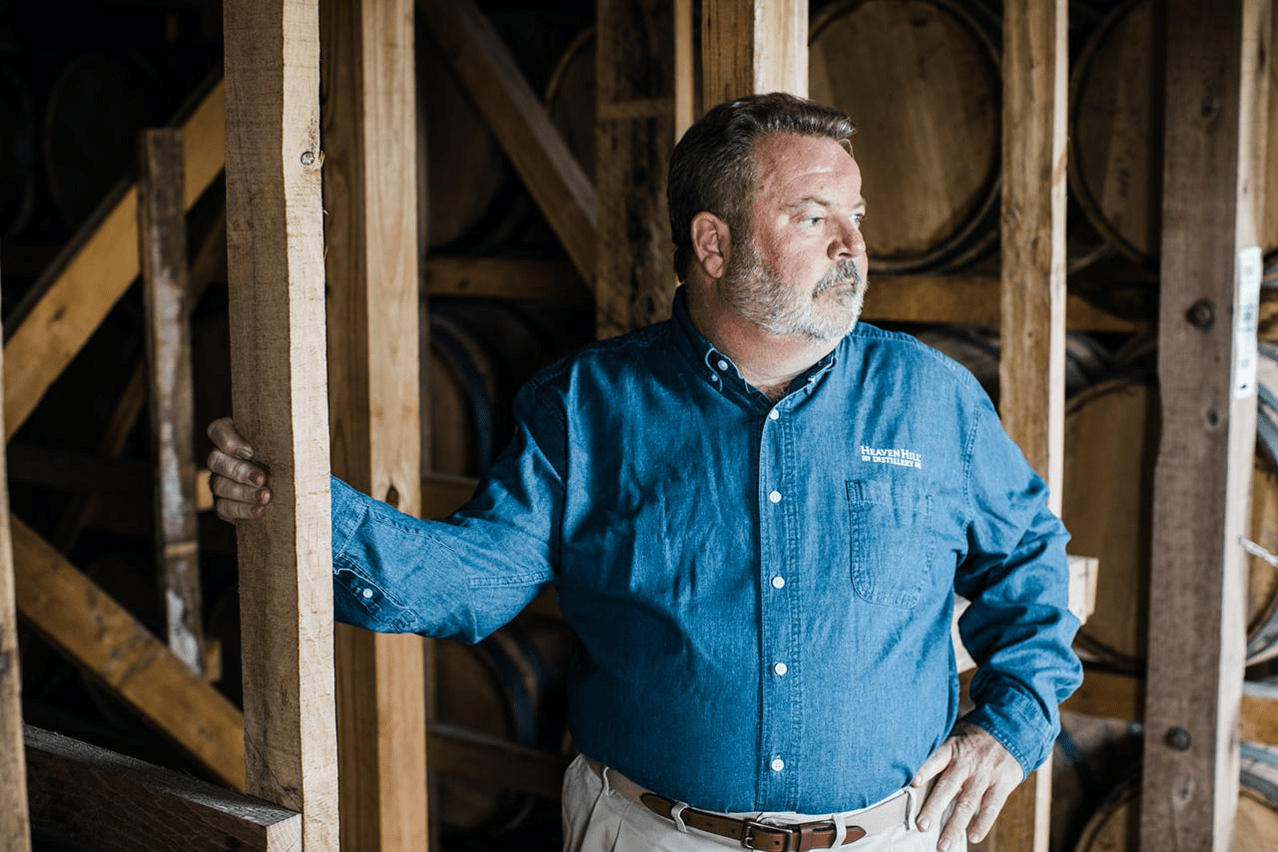 You played a key role in the creation of Larceny, one of our two wheated Bourbons. Talk about that.
When the idea for that came about, they let me have my pick of certain ages of wheated Bourbon barrels. Then, by blending, I came up with the original formula for Larceny. They gave me the opportunity to do it on my own and then Parker Beam, the master distiller, approved it. Like anything, it’s been refined some a little as the years have gone on. I’m proud of it.

Speaking of master distillers, how do you and current master distiller, Conor O’Driscoll, collaborate on whiskey production?
Since he’s on the distillery side, he’s tasting all the new whiskey. I collaborate with him on the aged whiskey end of things, picking barrel dumps and bottling. When we’re doing something special, he’s involved in it for sure.

What’s your favorite Heaven Hill spirit?
Henry McKenna 10-year Single Barrel Bourbon. I’ve been saying it’s the best thing out there for a long time, but it was a low-selling single barrel for many years. Now it’s going crazy because it’s won prominent awards.

What was your toughest day on the job in your career?
Oh, the fire. Definitely the fire (of 1996): When the fire broke out, Chris Briney and I went on top of the bottling house with fire extinguishers. The winds were terrible that day, so in case any pieces of flaming debris fell on the roof, we were needed to put them out. The wind and rain were so bad. He and I were hiding behind the HVAC units for about three hours. Luckily, nothing (flaming) came our way.

How will you pass what you have learned to future tasters and blenders?
Time and experience have given me the knack for knowing which warehouses are good for one whiskey while others are good for something else. Since so much of that experience is committed to memory, we’re getting that information collected and into a database by having me assess the effects of different warehouses on our whiskeys, and the effects of barrels located on different floors.

The nice thing is anyone here can follow our barrel inventory control program and see where I’ve picked past dumps for which whiskeys. I also keep a paper file handy to back that up. Someone could use both to know where I last got barrels for Larceny or Elijah Craig or whatever they wanted.

But there is a great team of tasters here at Heaven Hill who have tons of institutional knowledge… folks who have been around for a long time that I get to collaborate with daily. I’m continuing to mentor new talent that is popping up, and they are teaching me new things as well. You can never stop learning in this industry.

Describe something you’re looking forward to in retirement.
I’ve got a place at Lake Cumberland, so I’ll spend time there. I did buy a fishing boat, and I’ve got a pontoon boat, too. I’ve always had fast boats, but as a buddy of mine said some time ago, “We’re getting too old to get in and out of these things.” He was right: I wish I’d gotten a pontoon a long time ago.