The History of Women Behind Bars 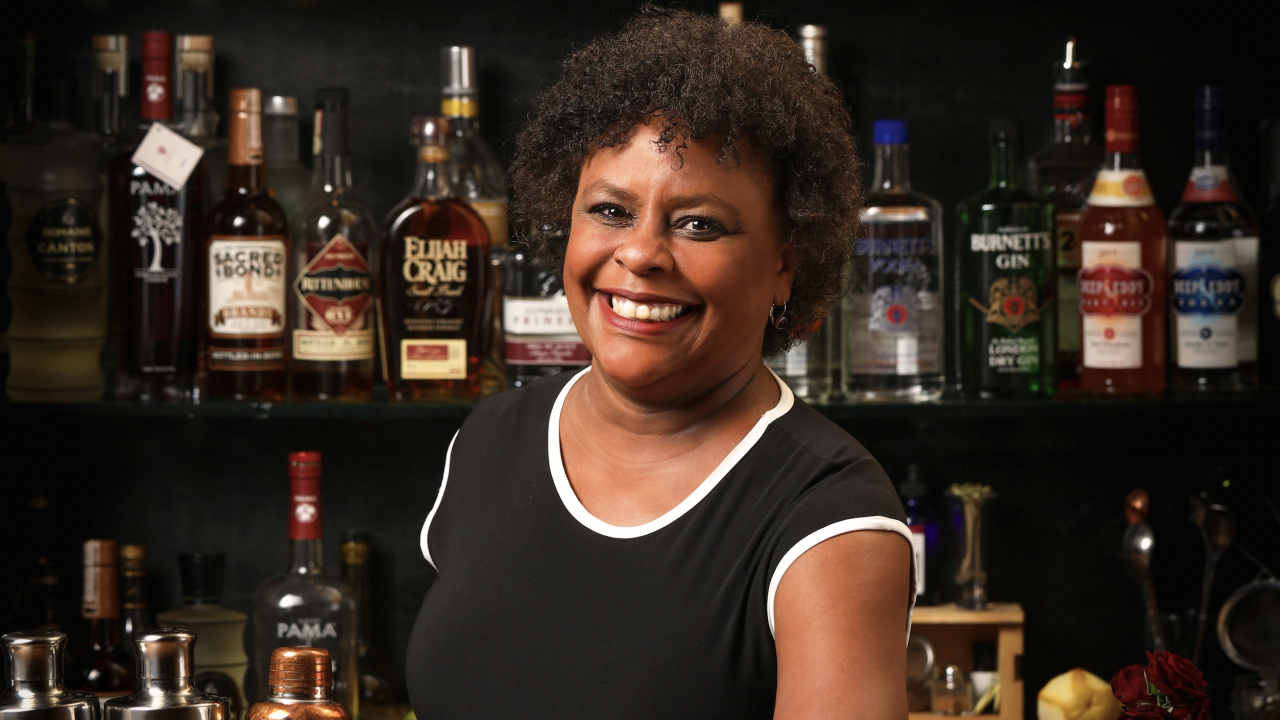 Lynn House will tell you that she grew up around spirits. In fact, some of her fondest memories are of the women in her life enjoying brandy, making moonshine or sipping on a whiskey. “I always grew up with my grandparents and my great grandparents sipping on whiskey,” says Lynn.

“My great-grandmother, the last time I saw her, she was 96 years old, and she was knocking back Old Grand-Dad.”

And while she’ll also tell you that those experiences meant she was never scared of spirits, a career in the industry wasn’t an obvious choice. Today, Lynn is a national spirits specialist and portfolio mixologist at Heaven Hill Distillery, but back when she first started working in bars 30 years ago, she was often one of the only women—and even more often was one of the only women of color. Besides, she was studying theater and saw herself winning a Tony someday, not crafting cocktails.

But the industry has a history of women pushing ahead and finding their way, even when things seemed stacked against them.

“I think a lot of people don’t really realize how hard women have had to work to get into this industry,” says Lynn. “So to understand the history of it, and the work that has been done, I think it fuels you a little bit. It’s that foundation and always understanding where you’ve come from, and I think it gives you a map of where to go or what needs to be done. Because when you have seen what has happened in a relatively short period of time, as far as more and more women becoming prominent in the industry, you know that in a short period of time going forward, there’s so much more that we can do.”

A theater lover at heart, Lynn first started working in bars to pay the bills in college. Bartending also gave her the flexibility to go on auditions, so she was able to successfully balance both careers for the next 15 years, until the roles began to dry up. By that time, she had worked her way up into fine dining restaurants and was making a really good, steady income. And then the cocktail Renaissance happened.

It was the early 2000s and Lynn was at a restaurant with a phenomenal James Beard award-winning chef, a curated wine list, an impressive sake list and a throwaway bar menu. She decided to change that.

“I went to the owners and said, ‘We should be doing a better job with the bar. We should be in congruence with what’s going on in the restaurant.’ And at the time it didn’t make sense because it was all wine.”

But the owner told Lynn if she was interested, she should go do something about it. So she did. Lynn read book after book, before deciding she was ready to teach a class at the restaurant. She started with scotch. After her class, the restaurant’s scotch sales went up 30 percent. The owner asked her to teach another class.

As Lynn started teaching more classes, she also started to help with buying. This was her first foray into helping curate a beverage program. And since she was still between acting gigs, it was a good way to feed her creative side. She also realized she was really good at it. She had a good palate. She could pick up on profiles others couldn’t. She decided to keep going and started training to build her palate, vocabulary and understanding of spirits.

“My love of it just grew and grew through that process,” she says. “And then I remember when I finished the Academy of Spirits and Fine Service, my teacher, Bridget Albert, who is one of the women that I think has been hugely influential on modern cocktail culture, took me aside. At the time I was still pursuing acting full-time and she’s like, ‘I really think you need to focus on this as a career. I’ve watched you and there’s something special there. I think you’ll go really far.’ And that was my ‘a-ha’ moment.”

RISING TO THE CHALLENGE

With her bartending career officially full-time and underway, Lynn continued to train and build on her education.

“I remember going to a seminar, and there were about 40 men. I was the only woman that was there. I was invited, I RSVP’d, my name was on the guest list. And when I walked in, a gentleman I’d never met before asked, ‘Can I help you?’ I said, “No, I’m here to attend the seminar. I’ve already copied my name on the list.’ And he said, ‘This is for bartenders.’”

Lynn was a bartender. In fact at the time, she was a bartender at one of the top craft cocktails bars in Chicago. The man got angrier and angrier, before telling Lynn, “Well, I’ve never seen you.”

“I thought to myself, ‘I’m here to learn and I’m going to learn everything I can,’” says Lynn. “It was very funny because it ended up being like a little pop-up competition afterwards. They were asking for volunteers. I said I’d do it, and I remember looking at that guy and thinking, ‘I am so going to win.’ And I did. I won.”

Unfortunately for women in the spirits industry, experiences like this haven’t been uncommon. Lynn says that when you look back at the history of the industry, the contributions of women haven’t always received the acknowledgements they deserve. But even when the odds were stacked against them, women managed to become bartenders, entrepreneurs, owners and even just patrons.

“I don’t think people understand the tremendous evolution in a really short period of time that women have had not just from behind the bar, but in front of the bar as consumers,” she says.

Let’s jump back to the turn of the 20th century. Saloon culture was booming. But according to Lynn, women weren’t allowed behind the bar because it was seen as something that could corrupt them and ruin their reputations.

“The thing that surprised me the most was actually looking at where we were in the 1890s,” she says. “When you look at how many bartenders there were, it was over 55,000 people according to the 1895 U.S. Census, but only 147 of those were women. And there were several thousand women who were doctors!”

Jumping ahead to Prohibition, it was illegal to consume, produce, and most importantly, sell alcoholic beverages. This worked in women’s favor. Instead of men and women being separated, everyone was unified in that if you were imbibing or creating cocktails, you were a scofflaw. For the first time, Lynn says, you had men and women intermingling, people of different ethnicities intermingling and women working behind the bar at speakeasies.

But with the end of prohibition in 1933, it was once again seen as problematic for women to be patrons or workers at bars. But they didn’t disappear. They got more creative. And during World War II, women were needed back in the workforce.

“It was Rosie the Riveter and Bessie the Bartender,” laughs Lynn. “We worked the bars, we worked the restaurants, we worked everywhere. And then when the war ended, men needed to come home to their jobs. Not only were women kicked out of working in bars again, we got kicked out from being able to be a customer. A woman in a bar was considering a ‘B-Girl,’ a bar girl looking to take advantage of a GI and his paycheck.”

In 1984, the issue went all the way to the U.S. Supreme Court. In Goesaert v. Cleary, the Court upheld a Michigan law that prohibited women from being licensed as a bartender in all cities having a population of 50,000 or more unless their father or husband owned the establishment. The argument was that the profession of bartending could potentially lead to moral and social problems for women. “Goesaert” in this case was Valentina Goesaert. She was the owner of a bar in Dearborn, Michigan, and unfortunately the court ruled 6-3 against her.

While Michigan’s law would eventually be overturned, none of this is ancient history. Lynn says California and Illinois were some of the last states to allow women to bartend in the 1970s. But knowing this history has helped ground her and gave her a foundation that she was able to build off of in her own career, especially when things got tough.

“Tony was one of those cheerleaders for me. The first day I met him, he said, ‘Women are better bartenders because they have better palates,’” says Lynn. “And he’d say, ‘Look at what Helen did.’ And I think that’s so fantastic.”

Tony is Tony Abou-Ganim, a nationally known mixologist who worked at the Bellagio in Las Vegas and wrote “The Modern Mixologist.” And Helen was Helen David, Tony’s cousin and a trailblazer for women in the industry. Helen opened The Brass Rail on June 15, 1937 in Port Huron, Michigan. At the time, women business owners were rare, and it was illegal for women to be bartenders in the state. But she ran the bar for 69 years until her passing in 2006, and the Brass Rail remains in business.

Helen taught Tony how to bartend. He’d go on to mentor Bridget Albert, the teacher who encouraged Lynn to stick with the business.

“Tony would come and teach our class all the time,” Lynn says. “And he would tell us the story of Helen. Because this was his cousin, he is such a champion and such an ally of women in an industry.”

Lynns says that today, more and more women are behind the bar, running beverage programs, and seeing their flavor palates and sensibilities infused into the industry. Not to mention owning bars and brands. Lynn also points out that she’s proud to be a part of Heaven Hill Distillery, a family-owned and operated business with women in a variety of roles across the company, including executive leadership positions.

“When I was getting started, there weren’t a lot of women in the industry, and there definitely weren’t a lot of women of color. I could look out and not see many people that looked like me,” says Lynn. “And so to me, it’s super cool that now I can go out and see so many different people out there. They’re just really running with it and helping make this industry more diverse and more balanced.”

What’s even cooler, says Lynn, is when those people let her know they got involved after seeing her. By believing in herself, sharing her story and sharing the stories of other women, she’s been an inspiration.

“There’s a lot of history this industry needs to unpack. That’s why I wanted to share these stories, this history. If you look at it from where Helen was to where we are now, and just what we’ve done even in the past 10 years as far as women in the industry—it’s pretty amazing.”