Why You Should Add Bottled-in-Bond to Your Collection 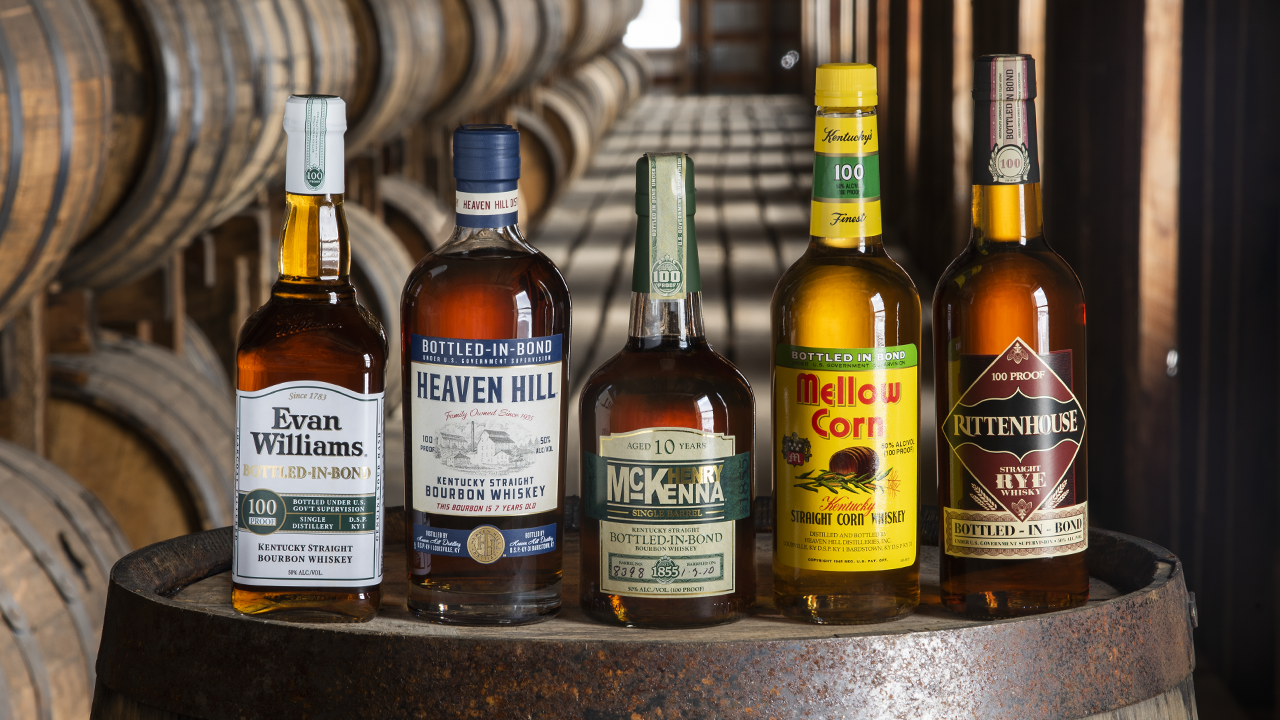 March 3 marks the anniversary of the passage of the Bottled-in-Bond Act of 1897, a 125-year-old landmark law created to improve the quality of the whiskeys we all love. Here’s why it was needed.

For most of the 19th Century, whiskey was sold by the barrel, not bottled. To stretch product and profits, bulk whiskey buyers—called rectifiers—regularly amended those whiskeys by adding unsavory things to the barrel like neutral grain spirits for strength, caramel syrup for color, fruit juices for faux complexity, and, believe it or not, tobacco spit for, well, who knows why?

Worse, rectifiers sold these maligned spirits as “Bourbon,” a nationally renowned Kentucky-made product. A lot of proud distillers in the state took the offense personally and feared their customers weren’t getting what they paid for. Distilling legends such as E.H. Taylor Jr., James E. Pepper, George Garvin Brown and Isaac Wolfe Bernheim, urged the federal government for help to protect against such scandalous adulteration. The law they created said, for a spirit to be labeled Bottled-in-Bond, it must be …

Today, all these years later, the law remains in effect, and Bottled-in-Bond spirits are still being made. Here at Heaven Hill Distillery, we regularly produce about a dozen “BIBs” and dozens more are made by a mix of large and craft producers. Joining us to discuss why BIBs are steadily gaining nationwide popularity are two distillers who make them, and one man who’s spent years rekindling the nation’s interest in this unique and historic category.

Question: Bernie, let’s start by asking you why BIBs are becoming so popular.

Bernie Lubbers: There are a lot of reasons, but here are just a few. One is media coverage of Bottled-in-Bond in general. Whiskey writers recognize their significance and the value of those spirits. When whiskeys are good, affordable and readily available, they’re easy to write about. Another is the rebirth of American Whiskey cocktails. At 100 proof, a Bottled-in-Bond whiskey really shines through in cocktails. People also love whiskey history, and it’s hard to get any more significant in American Whiskey’s past than the Bottled-in-Bond Act. I could go on for hours, but I’ll let these guys talk.

Q: Paul, why do you think BIBs are becoming so popular at the craft level?

Paul Hletko: For us, it’s just a wonderful category. But it’s definitely a subset of drinkers who get really excited about it. Those who appreciate Bottled-in-Bonds usually are whiskey aficionados who want products with that mark on the label. And we’re here to provide it.

Q: Al, why was it so important to produce BIBs at Laws when you started almost 11 years ago?

Al Laws: Given the competitive business we’re in, it was like planting a flag that said, “We can do things that bigger distilleries can do. We can be as authentic with our whiskey as anyone else because we can follow these standards.” It was a point of pride for us to do it.

Q: In saying that, are you stating that making BIBs is a challenge for a small distillery?

AL: Oh, yeah, that’s tough in our world. The restriction gives us just six months to make enough whiskey for one batch of Bottled-in-Bond, and for us to get a decent batch size, given our production volume, takes work. Our first Bottled-in-Bond batches were 10 barrels, but over time, we’ve grown our supply to where we can use 20 to 25 barrels. That’s nothing like those folks do at Heaven Hill, of course!

BL: That’s true, but even for us, our Bottled-in-Bond batches are small compared to our regular batches. Much smaller, in fact.

Q: So, Paul, even though BIBs are sought after by whiskey aficionados, they still add work and expense. Why do it?

PH: We think it gives the aficionado customer more confidence in what they’re buying from us. Maybe they’ve watched us grow for a while, but they’re not sure about buying our whiskey yet. Then they see our whiskey is Bottled-in-Bond, and they know it has to be made to high standards. Maybe that’s the thing that gets them over their hesitation of buying from a distillery they’re not familiar with. It’s worth it to us to have that option.

AL: Bottled-in-Bond gives us a great chance to stand out and build on that category’s reputation. BIB is already unique, but we don’t have to stay at 4 years with it. So, we’ve got a 7-year we’ll release some day, and we’re working to have an 11-year. We’ve got Bottled-in-Bond Bourbon and rye, and we’ll soon have Bottled-in-Bond wheat and malt whiskeys. By doing that and focusing on unique grains, suddenly we have things you can’t get anywhere else.

Q: Paul and Al, you both sell your BIBs at premium prices. And other distilleries in the category sell them quite a bit higher than most of Heaven Hill’s BIB line. Is that a risk to your sales if people compare prices?

AL: By choosing that price, we’re signaling to the market that what’s in the bottle is a premium product. Not only do we need to charge more to make a profit, we see that higher price as a tilt toward history—that this category is geeky and we celebrate it. In fact, I’m thrilled to see other Bottled-in-Bonds out there increasing in price. One way a consumer could look at a higher price is, “They’ve taken the extra effort to make this.”

BL: I couldn’t agree more. There are a lot of products out there that make me wonder, “How are you charging this much for that when Heaven Hill is charging only this much?” That Heaven Hill prices its Bottled-in-Bonds so favorably is a huge value to the consumer. And I’m a consumer, too, so I appreciate that.

PH: I don’t think a higher price is risky when the consumer understands what it is. And by its own standards, Bottled-in-Bond is transparent. Look at spirits marketing in general: it’s all about a story. But with Bottled-in-Bond, the consumer knows the story is real … one distiller, one distillery, one season … all of that. And I think that with experienced drinkers, there’s more interest today in that transparency.

Q: Heaven Hill’s first Bourbon was bonded, so perhaps it’s not surprising there are so many other BIBs in the portfolio. Bernie, tell us about a few of those.

BL: Before I answer that, it’s interesting to point out that Heaven Hill has always positioned itself to acquire whiskeys like these regional gems that could be grown into something larger. It’s just something we do. Rittenhouse Bottled-in-Bond is a great, historic brand we acquired in the early 1990s. Rye Whiskey was a negligible category at that time, and Rittenhouse was a regional brand. But Heaven Hill wanted the brand—and look where it’s gone since!

Mellow Corn is another. The market for corn whiskey is even more miniscule than Rye Whisky. But our president, Max Shapira looked at it and wondered if corn whiskey might become the next big category. If so, we’re already positioned to start competing immediately. It’s still a small category, so I’m telling all my friends in craft distilling, “Make more corn whiskey! Let’s build this category!”

You mentioned Heaven Hill Bottled-in-Bond. For nearly all its life, it was largely a Kentucky-only brand. But as people visited Kentucky for distillery visits on the Kentucky Bourbon Trail®, they found what was a gem. As we realized they were taking this little gem home, we saw that there was national market potential for it. So we started to set aside whiskey to make it a national brand, and we’re growing it like that. 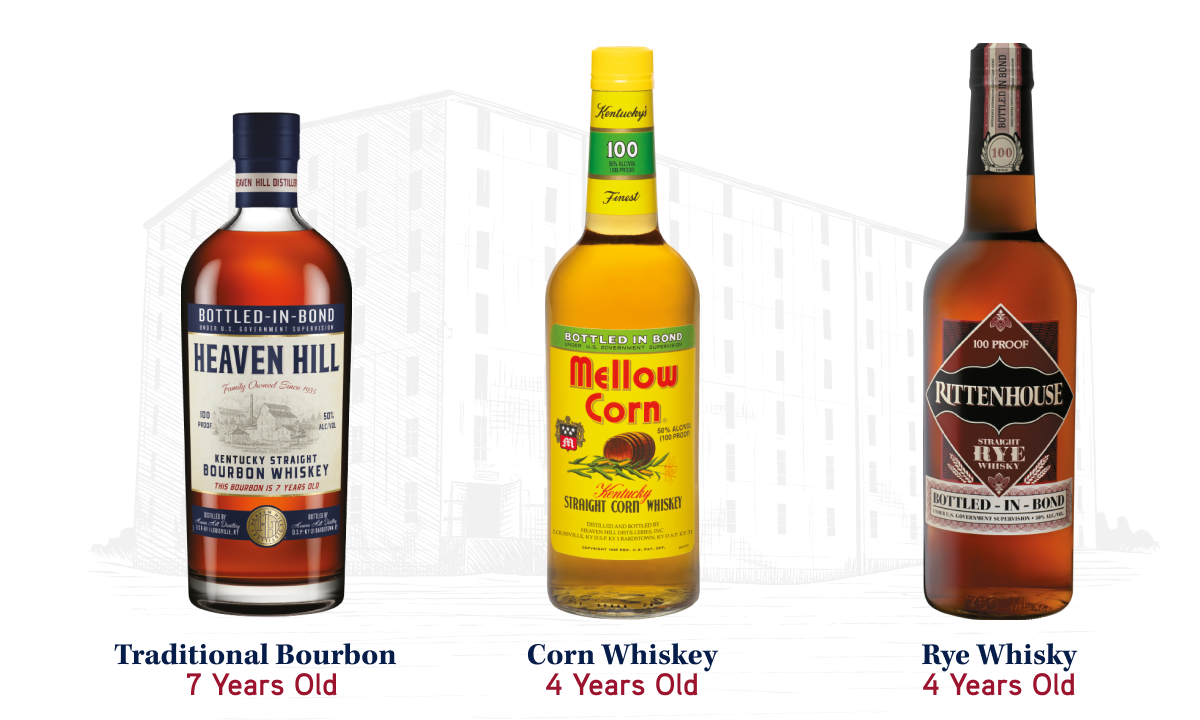 While each of these whiskeys must meet the same Bottled-in-Bond requirements, they cover a range of styles and ages.

Q: Why has Heaven Hill Distillery remained committed to preserving the tradition of Bottled-in-Bond?

BL: There’s no short answer for that, but I’ll do my best! Max Shapira sees so many of the brands we’ve acquired as pieces of whiskey history, and he loves that history. Over the years, some were acquired as part of larger transactions, and some were acquired outright. When we got them, most of them were being made in much smaller quantities than in their heyday, and Max likes the challenge of nurturing them back to life and growing them. Our Bottled-in-Bonds have done particularly well using that model.

Isn’t it cool that Henry McKenna Bottled-in-Bond became an award-winning Bourbon as a Heaven Hill brand? Are we thrilled that our Bottled-in-Bonds are darlings of the mixology scene? You know we are. And Rittenhouse Rye Bottled-in-Bond, it was once just a regional brand, but it’s now a national brand credited with reviving American whiskey cocktails. How cool is that?

I say it often: We are in the whiskey business, not the whiskey charity. And Max’s love of whiskey history aside, his business sense is spot on when it comes to Bottled-in-Bond spirits. These are great for our business, great for our standing in the industry and ultimately, great for consumers because of the value they deliver. Can you tell I get excited about this? 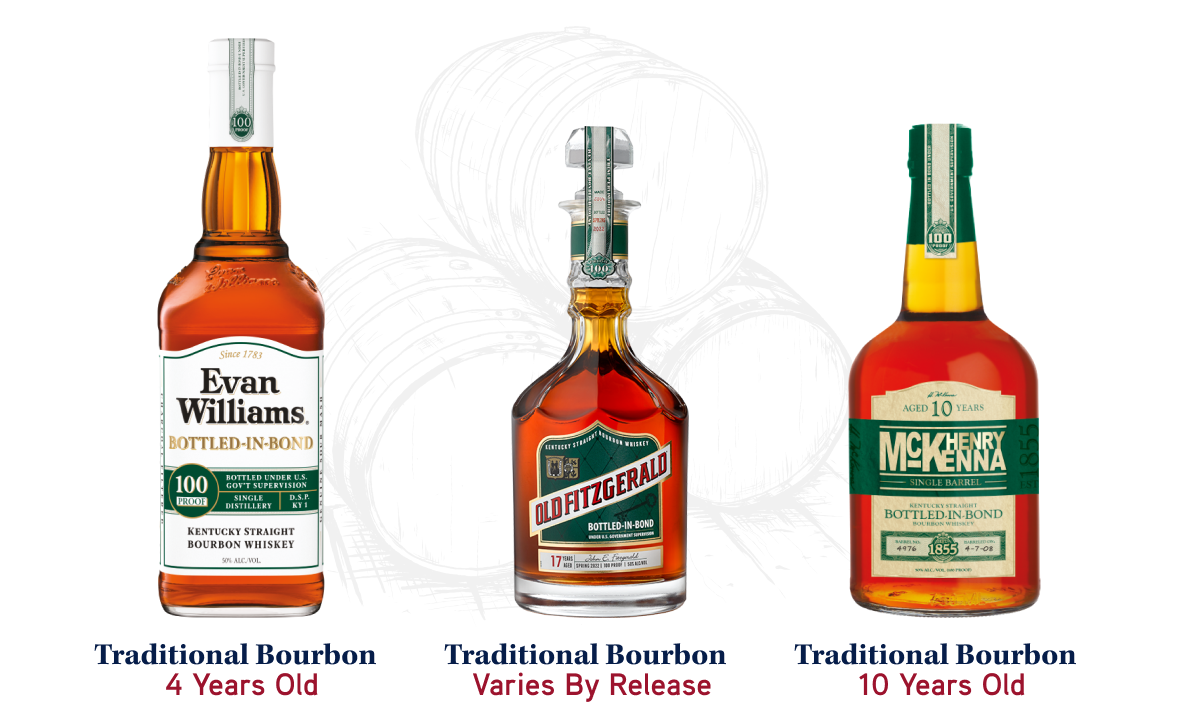 In our Bottled-in-Bond portfolio, we’re proud to feature several historic brands, acquired and preserved over our 86+ year history, as well as new classics.

Q: Last question for everyone, what’s the future of Bottled-in-Bond?

PH: Everything we do matters; details matter; and Bottled-in-Bond matters because the details are so important. We like doing it, so I see more of them coming from us.

AL: We’re trying to set aside 50 barrels of whiskey every quarter to continue building an older bonded inventory. We see what we’re doing as the elevation of American Whiskey—this happens nowhere else in the world! I hope people appreciate that because we’re going to keep making them.

BL: We’re passionate about it, so the answer for Heaven Hill is this thing will go on well after I’m retired and gone for good. As a category, Bottled-in-Bond is such a small niche that the potential for growth is huge. Just one brand, Evan Williams Bourbon, is many, many times larger than the whole bonded category. So, we can only hope that other distilleries will join us in making these great whiskeys. We know consumers want them, so join us and make more!

To learn even more about Bottled-in-Bond, visit our latest experience which dives deep into one of our favorite American Whiskey traditions.